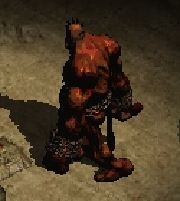 Gorebellies are Demons. They're a species of the Blunderbore family of monsters.

Massive melee brawlers, Gorebellies are the largest normal type of monster in the game. They don't quite live up to their size, moving slowly and taking a lot of hits, but they can deal out quite a bit of punishment as well, and pack a stunning hit that is worse on mercenaries and minions than on characters.

Gorebellies are slow with the first hit and have a slow hit recovery, but can chain multiple hits in rapid succession if they get on a roll.

Gorebellies use Smite (skill level 1 in Normal, 4 in Nightmare, 8 in Hell).